Book Review: The Wisdom of Teams

Introduction:  What We Have Learned 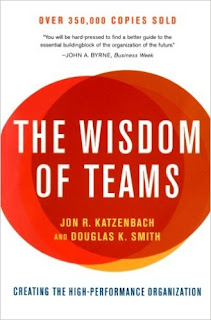 Originally written in 1993, this edition written in 2003 has additional insights from 10 years of working with teams.  The authors see more pragmatism on the subject, less thoughtless rushes to a fad movement.  Top leaders are seeing that teams also apply to themselves, at the top of the business.  They see the core aspect as discipline, not the management fad du jour.  The discipline for team performance has 6 basics: team size, complementary skills, common purpose, performance goals, commonly working agreements, and mutual accountability.  The desire to be a team is not sufficient - one must have performance centric outcomes as the objective.  Leadership is more important at the beginning - but not the primary determinant of success.  Most organizations have untapped potential in team performance.  The organizations performance ethic makes the difference between one-off success and widespread organizational team performances.

Prologue:  A Note About What to Expect

The book notes the obvious concepts but also the subtle nature of language used to describe the concepts are required to be precise in defining the discipline.  The authors find that it is difficult to apply common sense to teams.  Expect failure when: building the team for its own sake is the goal (rather that demanding performance challenges), the discipline of “team basics” is overlooked, many areas for teams are left unexplored in organizations (teams: recommend things, do things, run things), teams at the top of organizations are the most difficult, individual accountability is the norm (as apposed to team/group accountability). 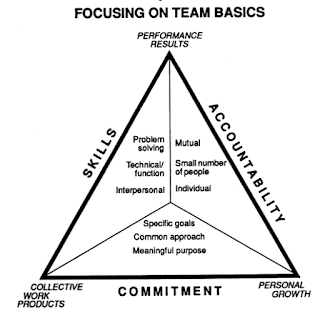 The authors have learned that although many executives understood the argument for using teams many didn’t extract the real potential from the teams or the opportunities to use teams.  Many times because of unwarranted assumptions and poor knowledge.
Key lessons:

Teams are made up of individuals with complementary skills - build on strengths, not to cover weakness.  Define clear goals, via team communication. Build real-time problem solving skills and initiative, allow adaptive behavior.  Provide social dimension to enhance work - teams fundamental nature are people interactions.  Fun is part and parcel of the process - encourage it.

Teams do not solve all problems, they are not the answer to every problem.  They require discipline and practice.  Organization culture may be opposed to teams if a strong individualistic performance is reward in spite of team performance.

Chapter 2:  One Team: A Story of Performance

As a basic unit of performance a team blends the knowledges, skills and abilities of several people strengthening the overall performance of individuals.  Many people having once experienced the power of a high performing team long for the experience again.  Burlington Northern launched the Intermodal Rail era after deregulation in 1981.  Largely the result of a core team of 7 individuals, with an extend group of 45 people.  This team was largely self selective, all were interested in the new prospects of intermodal rail and saw the value even in face of large corporate resistance and hostility.   The team started small and grew as needed, bringing in and fostering the required skills.  A positive attitude that the goal was possible was shared by all.  Hard work and long hours were the norm for the group.  When the group’s proposal was approved but with the worst pilot project locations the group saw the opportunity to prove the concept and jumped right into it.  The core group shared leadership roles and had strong affinity of tacit information on specific skill sets.  They assumed a ask for forgiveness rather than permission attitude, and resolved impediments quickly.  The results was a change in the business model for the industry, intermodal rail is now common place and well established business process for the rail industry.

Teams are a “powerful vehicle for performance” (p. 43)  many companies are embracing teams as a unit of performance.  There are differences in understand of what a team is and what constitutes a performant team.   Teams work well when they have specific results to achieve, and the performance ethic of the organization demans those results.

“A team is a small number of people with complementary skills who are committed to a common purpose, performance goals, and approach for which they hold themselves mutually accountable.” (p. 45)

Small number - in the Agile community we say 7 +/- 2  ( 5 - 9 members).  Reasoning is the tacit knowledge of each other (the group) and the intercommunication of the team.  The larger the number the lower the accountability for success.  Large numbers have logistical problems not seen in smaller groups (space to meet, etc.).  See Also: Choosing the Team Size in Scrum by Agile Pain Relief

Complementary skills - we call this a cross-functional team.  A team must have a person with the required skills to solve the problem, and it will take many skills to solve most any complex problem.   Many successful teams realize they lack certain skills, and become self reliant on learning or acquiring the skill set.

Committed to common purpose and performance goal.  Teams must see the purpose for their existence, be motivated to achieve the goal.  The best teams spend significant time discussing their purpose, reshaping it and refining that purpose over their lifetime.

Committed to a common approach.  Agreement on the approach, process to solve the problems is a key,  they may spend considerable time on this issue also.

Mutual accountability.  Teams must hold each other accountable for the achievement of the goal, the quality of the products, and the process.  They must be capable of defining their own standards for performance and encouraged to raise the bar.

A team does not start out at super high performance, it takes time to reach this goal.  Many teams never reach their potential.  Experts say that if a team does reach high-performance that it should not be disbanded but kept together, and given a new purpose.  The performance curve describes this growth to high-performance.

Work groups are not teams, though they may develop into a team.  One difference is the focus either on team performance or individual performance & accountabilities.

Pseudo-teams never agree on purpose, or accountability of the group, they get stuck in rituals and avoid rather than engage each other.

Every team will encounter obstacles, high-performing teams develop tools for overcoming these obstacles.  Teams lower of the performance curve may need help to over come obstacles of all natures.  Teams may become stuck, and not develop the tools to resolve their obstacles, then it is time for serious help.  Stuck teams: lack energy, or enthusiasm, have a sense of helplessness, lack identity, lack purpose, members are cynical, and have a high degree of mistrust.

Insufficient commitment to performance - team needs accountability for the problem and the solution, based in performance measures.

Critical skills gaps - team needs to hire experts or develop skills.  They must be capable of admitting they need help - identify the type of help and go get it.

Transitions and endings will also effect the team, may drop them back into lower stages of Tuckman model of development - allow for that, don’t expect no emotion for losses.