Is your office culture creating a "Double Bind"?

May 16, 2020 By David
Have you heard this term in your office "double bind"?  I bet you haven't - do you even have a clue as to it's meaning?  Since the majority of my readers are male - I can safely bet that the overwhelming number has no clue.  I've never heard it, I confess.

Our industry - software development - has a problem.  The Agile movement with it's lofty goal of improving the work life for developers could have addressed this problem.  Over the last 19 years (Agile Manifesto c. 2001) I've seen little movement in the needle of women in SW Dev (STEM Stats - 15 %).  Could the alliance moved that needle.... it is one of their initiatives. 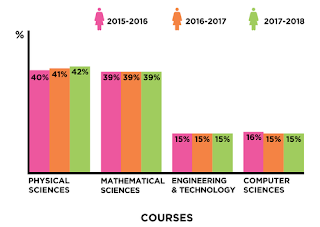 I use to have a goal, no objective, no a rule...  to have at least one female on each team.  After reading the article on When Woman Don't Speak - I've had to toss-out that "rule"... it can't work.  It is dangerous and hurtful.  I've thought of teaming all the "challenged" people on a team - doing the extreme Mob Programming with that team of "challenged" people, as Woody Zuill has done.

I now have a new goal - to create a team of 15% males (that's about 1 in 7 - if you follow my logic), within a large organization.  And then rotate into that team various males over the months... just to give the males a taste of how a highly collaborative team behaves.

One in 18 trillion are the odds one could select  44 consecutive WHITE balls from a bag of balls (one white, one black) - or more to the point 44 male presidents of the USA from the population.

When Women Don't Speak:  BYU shows how women get Shut Out.

Too Sweet or Too Shrill?  The Double Bind for Women - NPR