We are the last Hominidae standing...

Well, at this moment in time / history / as far as we can predict into a reasonable future (but Planet of the Apes starts in 2011 and the original story is set in 3978!)  By that time apes have started bipedal movement.  And are standing quite well.  I say this to point out that it is far too early (in evolutionary terms) to say H. sapiens is the last of the Hominidae (all apes - who knows why the gibbons were separated out?).  And our future is very questionable - given our terrible politics of division - our count down clock to nuclear (doomsday clock - 100 seconds to midnight!) annihilation,  our refusal to deal with human climate destabilization, and our inability to curb our desires.
Each of those species on the tree of life is at the pinnacle of evolution!  We H. sapiens are just one, and just happen to hold the cat-bird seat in the food pyramid.  That could change quite quickly - it did for the dino's back in the day (KT-day).
But how did we climb to the top of the pinnacle - what has made the human a fit for survival species?
Anthropologists might tell you we were not the fittest - our 50 yard dash time is not that good.  And we are good at long distances...  have you seen the movie, Hidalgo?  It is a great story of legendary horseman Frank Hopkins and his mustang Hidalgo.  Frank and Hidalgo outrun the pure bread Arabians and the Bedouins across the Najd desert to the sea in the 3000 miles "Ocean of Fire" endurance horse race. But not that good... the horse won the race not the rider.
But humans gain considerable advantages in groups.  We group up well.  Heck some of us do this so well that we stand in lines... sometimes for no apparent reason (like at the DMV).  It is this - almost unique - ability to group up, while still collaborating with other groups/individuals that have made humans a force to be reckoned with.
In their writings authors, Biran Hare & Vanessa Woods discuss our uniquely human ability to be friendly and team up with others.  I've yet to read their book Survival of the Friendliest - Why We Love Insiders and Hate Outsiders, and How we can Rediscover our Common Humanity - but I've devoured a few articles.  It reinforces the collaboration principle underlying all of Agile - Software Systems - Industry - Enlightenment - etc. 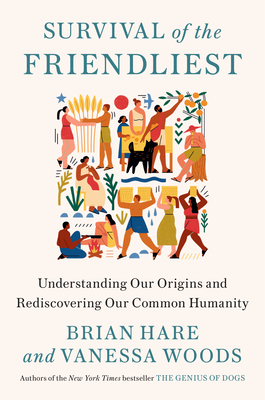 See Also:
Are we in one large group delusion - our mass media attention-grabbing delusion that I am the center of it ALL?

In the early days of digital culture, Jaron Lanier helped craft a vision for the internet as public commons where humanity could share its knowledge -- but even then, this vision was haunted by the dark side of how it could turn out: with personal devices that control our lives, monitor our data and feed us stimuli. (Sound familiar?) In this visionary talk, Lanier reflects on a "globally tragic, astoundingly ridiculous mistake" companies like Google and Facebook made at the foundation of digital culture -- and how we can undo it. "We cannot have a society in which, if two people wish to communicate, the only way that can happen is if it's financed by a third person who wishes to manipulate them," he says.

How we need to remake the Internet - Jaron Lanier - TED Talk